… I swear I do. Which is why I am always shocked when I am mistaken for straight. Even if someone misses that distinctive ‘queer’ scent on me, I figure that my outfit will always be the giveaway… but apparently that is not always the case.

Though I do not necessarily categorize myself under any of the typical labels, most of my friends would call me “femme” meaning that I am comfortable in dresses/ skirts and seem more on the ‘girly’ ‘feminine’ side of the spectrum. While I do not completely disagree with this assessment, I would more accurately call myself a boho tomboy. I look to Jimi Hendrix, Patti Smith and those who prefer the nomadic lifestyle for inspiration.

I see the way I choose to dress as very different from what a typical heterosexual woman would wear. Somehow even when I ‘girl it up’ I’m still a little tougher, a little edgier, a little less traditionally feminine. I might wear a super sweet soft flowing dress, but it only looks right if I pair it with combat boots and tonnes of spikes. The newish phenomenon of ‘boyfriend jeans’ is right up my alley because I’ve been wearing men’s jeans… well men’s clothes in general, forever. I understand that I am read as ‘quirky’ or ‘different’ but outside of the LGBTQ community, rarely gay. 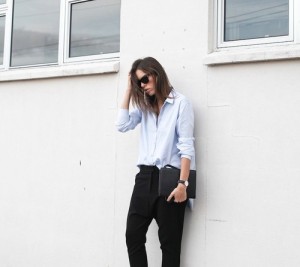 Historically LGBTQ people used physical signifiers/ fashion items to be able to identify one another, for example the subtle pinky rings, without ‘outing’ themselves to the heterosexual mainstream. With the growing acceptance of LGBTQ culture these signifiers have become less and less necessary. So the question is now, in the post-rainbow era, what makes a person “look” gay? While, I do recognize that for the most part no clear distinction between straight and non-straight individuals can necessarily be acknowledged, I have observed certain physical attributes or behaviors that have been tip-offs for me (all of which I exhibit myself).

I realize that as it is with every rule, there are exceptions to this list. However, this list will definitely help you hone in on developing your gaydar!